Not much to report and no new photos really, although we are off to Romania at the end of the month so in a few weeks there'll be loads of new pretty pictures. In the meantime I have added some pictures of my trip to Berlin in September last year here. Enjoy!
Posted by Lauren in Brisbane at 17:57 No comments:

So as to give a better idea of how glamorous living in London isn't, here are some photos of our Christmas Eve. After returning from Bruges in the early afternoon we... had a nap, I think. Then I cooked some risotto, which seems to be the only thing I can manage to cook these days which is edible. Then we watched some episodes of Northern Exposure, including a Christmas episode. After that, I'm pretty sure we went to bed.

Here is our little Christmas tree. We caved at the last minute and bought one just a few days before Christmas. Most people here seem to have real trees, but they're cut off at the trunk and embedded in concrete or wood. I didn't really like the idea of that so we got a very small living one, which I think we'll eventually plant in the garden. It was about 40cm tall when we bought it but it's already closer to a metre. Our Christmas spirit did not extend to tree decorations. 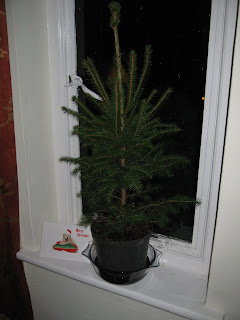 Some Christmas cards from home... 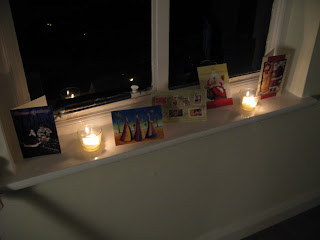 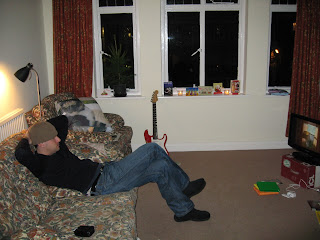 (Bron, you can see your present on the chair to The Boyfriend's left - sorry, I couldn't resist opening it early!)

This was my Christmas present from The Boyfriend - a print by an English artist called Becky Blair. We managed to overpay for it by almost 100% when we were seduced by a quirky little store in Whitstable. I later found you can get it direct from the artist for far less. Ah well. At least we're supporting small business. 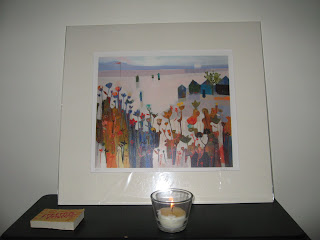 Posted by Lauren in Brisbane at 14:04 No comments: