The dead centre of Acton

Since I moved to London last July, I've travelled into to work every weekday on the Central Line, which takes me through through Acton, White City, Shepherd's Bush, Holland Park, Bayswater and into the city. Peeking over the fence at North Acton station I would often notice the wingtips of a stone angel, or the curve of a Celtic cross, and make a note that I must visit that cemetery someday. And then I would promptly forget all about it. Finally in October, before the trees were bare and the sky was eternally grey, we spent one Saturday exploring the cemetery as well as some less than salubrious parts of Acton and Park Royal.

Let me save you the time right now and say that there is no reason to explore Acton and Park Royal, unless you are particularly interested in mercilessly unending major roads, blocks upon blocks of grey concrete warehouses, and the odd deserted pub. And Acton Cemetery. We only did it because we got lost in a vortex of roundabouts and endless identical sidestreets on the way back from the cemetery. We were trying to find the cinemas in Park Royal in time for the 2.15pm showing of Burn After Reading. Later we realised that we'd been walking in exactly the opposite direction and had no hope of ever making the movie. Still haven't seen it either.

Acton Cemetery looks newer than the more central London cemeteries I've seen, which is logical as it was only opened in 1895 and not the 1600s. It's now closed to new burials but if you have an existing family grave in there you can still be buried in it. Sadly, that's about all I was able to discover about Acton Cemetery by Googling it.

This building was gated so I'm not sure it's a proper church/chapel or just a shelter. 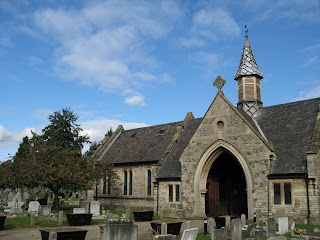 Wonky graves (a bit like the inside of the Intrepid Fox). 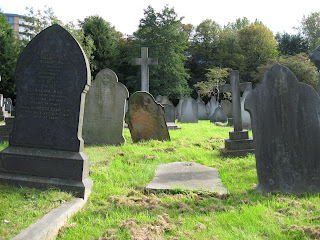 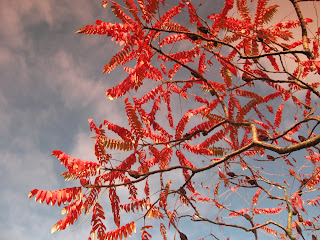 Now, I consulted Google about this as well, but had no luck discovering the significance of the rubber ducks below. They were on several graves around the cemetery but I couldn't see a pattern between those memorialised by toy ducks in sunglasses. I suppose I prefer them to fake flowers though. 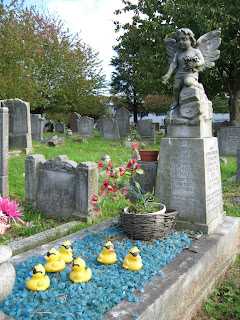 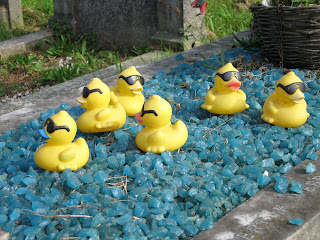 Another point of noteworthiness near my office, in some circles at least, is England's oldest Catholic church, St Etheldreda's. It was built in 1250. That's about 650 years older than the oldest buildings in Brisbane. It's sandwiched between two other buildings on Ely Place, Holborn. 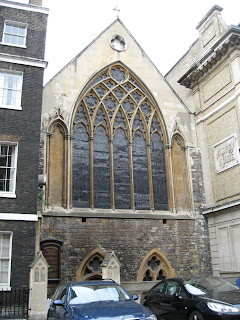 Ely Place is another London anomaly - it looks like normal London street (albeit dead-ended by a massive brick wall) but it's guarded by a beadle who sits in his little gate house at the entry to the street, presumably making sure no unsavoury types go near the barristers' chambers and classily understated businesses which fill the grand rows of houses. I think this is because the street happens to still be the responsibility of the Crown, rather than the City of London like most streets. That might be right, who knows... it's nice to see how much my property law knowledge has come along since my arrival in the UK 18 months ago (i.e. not at all).

Moving back to Princess Etheldreda, the church's namesake, she sounds like one of those medieval heroines who was lauded then, but would be a terrible bore now. According to the church website, she hoped to be a nun, but agreed to a politically-motivated arranged marriage with a neighbouring king on the proviso that she could remain a virgin. When her husband tried to talk her around, she ran off and founded a religious community. The website says she then lived a life of "exemplary austerity". There's also a vague hint that she had some sort of supernatural properties which prevented her body from decomposing at the normal rate upon her death. Perhaps it was something to do with all that austerity.

This puts me in mind of Mansfield Park (which I finished reading a few weeks ago), and its heroine who is so prim and disapproving of everything (other than sewing and doing what she's told) that I spent the whole book hoping she'd loosen up a bit and run off with the dashing villain instead of marrying her annoyingly virtuous first cousin.

The website also says Etheldreda was the daughter of "King Anna". Sounds very progressive for 600 AD.

More recently, the church has been the subject of extensive controversy (according to the Telegraph) because apparently the new rector this year is "not very enthusiastic" about giving mass in Latin, which could impact on the entrenched tradition of giving the 11:00 mass at St Etheldreda's in Latin. And, even more shockingly, the new curate "doesn't know Latin" so he will say mass only in English. He also "declines to wear the church's sleeveless embroidered Roman chasubles". I have no idea what a chasuble entails but it certainly sounds like some moneyed London matrons would have been clutching at their pearls and repressing their outrage in true English fashion earlier this year. Or maybe that stereotype is inaccurate for Catholics? :>)

(Just look at the photo of that journalist on the Telegraph site - a poster-boy for prim disapproval if I ever did see one.)

One the same day I wandered past St Etheldreda's, I came across St James Clerkenwell - from a distance, a fairly normal-looking London church (you can see it here). Now I'm not attempting to have a go at churches or religion in general today, but I don't know what this was all about: 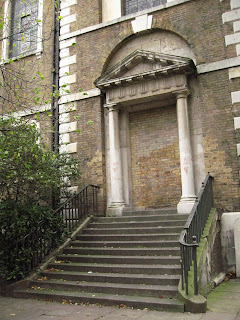 Stairs to a brick wall? Is this like in Indiana Jones, where he had to walk across an invisible bridge to show his faith?
Posted by Lauren in Brisbane at 09:40 No comments:

Things that made me seethe last week #1

We spent a bit of time on trains between northern Italian towns last week and I amused myself intermittently by listening to various podcasts from Radio National, an arm of the Australian Broadcasting Corporation's radio empire. One particular program featured, among other things, an interview with Cathy Day of the Australian National University, on her recently completed study of inbreeding in English rural villages. There is a report on it here if you feel compelled to learn more on this subject.

Towards the end of the interview, the interviewer (Richard Aedy) asked Day what the residents of Stourton and Kilmington, Wiltshire, thought about her coming to delve into their respective shady ancestral histories. Day responded that some of them were much more bemused by the fact that a colonial was conducting a research project in the first place. She went on to say that several people said they had not realised there were any universities in Australia as there are none on Neighbours. One gentleman likened the situation to "an ant coming to study the entomologist".

I'm struggling to craft a response to this which isn't guilty of similar offensive generalisations and ignorance about the British. Or one that has any sense of humour. Perhaps I'll just let the powers of deduction behind the Neighbours reference speak for the residents of Stourton and Kilmington.
Posted by Lauren in Brisbane at 10:25 4 comments:

This was St Mark's Square, Venice on 5 December:

This was St Mark's Square on 11 December:

(Note these are not my photos. The first is from the International Herald Tribune and the second is from the Orlando Sentinel.)

Luckily this was St Mark's Square on 8 and 9 December, when we were there. 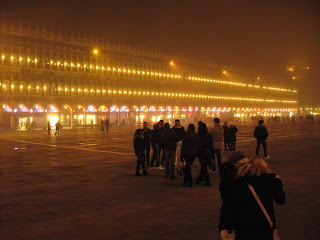 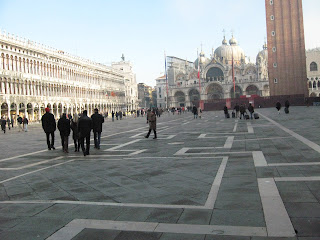 Sometimes the travel gods smile on you.

Although we also picked up dismal colds so I suppose it all evens out in the end.

For my birthday when I was little (I couldn't say for sure how old) Mum made me one of those old classic Bert-and-Ernie-from-Sesame-Street cakes, like this one (although I don't remember the colours being so lurid):

That night I had a nightmare that the Ernie reached out from the cake and pulled off my nose.

I'm not sure if that's why these cupcakes (below) freak me out so much.

Maybe it's just the slightly evil look of glee they have ... as though they're about to come and eat me. Like little cake piranhas.

1. Sitting on the tube to my home station the other night - usually an iPod on, put-my-head-down-and-bear-it experience of unexplained delays, mysterious odours and forced close proximity to others - the trip was hugely improved by the train driver. He had a more pleasant and calming intonation than your average TV host and his announcements managed to be both concise and slightly entertaining. (You don't want to be too entertaining in that environment - people's fuses are too short and you end up with eye-rolling and impatience, like on Virgin Blue in Australia.) Anyway, I was completely charmed by the driver's voice, so once the trip was over I looked out for him on the platform. Luckily he seemed to be at the end of his shift and so was packing up and alighting along with the rest of the passengers (the station is the terminus for that branch of the Central Line). He was chatting animatedly with a co-worker and I noticed he was carrying Buddhism for Dummies.

2. It is so cold here lately that the footpath was actually slippery with frost this morning. Even with my killer Doc Martens on (not white) it was like ice-skating at one point.

3. I can't believe I didn't mention this earlier, as it was quite exciting for me, but I've resigned from my job and am now serving out the purgatory of my three-month notice period. I'm sure my firm would quite like me to leave earlier but the contractual requirement is three months' notice so I couldn't leave it till later on and cross my fingers that they'd let me go earlier. After all, we have a plane out of London and into Cairo all booked.
Posted by Lauren in Brisbane at 11:13 2 comments:

While I'm still on Autumn, here are some shots from Kew Gardens in late October. I'm feeling a bit fuzzy and in need of a holiday (which I'm getting next week) so expect things to quiet down here again until I get back from Italy with some more photos and hopefully some more inspiration. 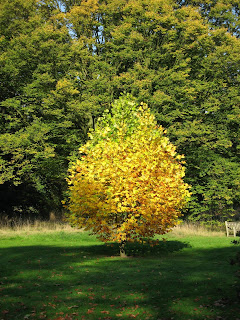 That's The Boyfriend playing a corpse under the spectacular tree. 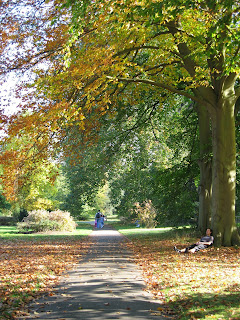 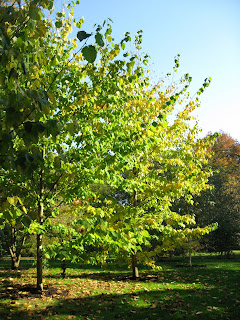 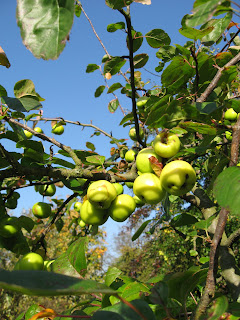 The Boyfriend on the skywalk thing - a huge wood and metal walkway through the canopy (sponsored by Xstrata, of course). 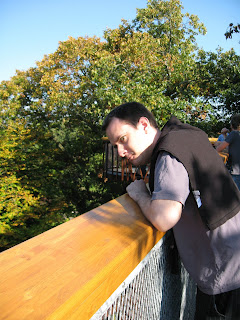 I don't know what these flowers are (they look a little like fresias) but when I was small and read old picture books they'd always have illustrations of woodland with carpets of individual blooms like this. I recommend clicking on the picture to see it more closely. 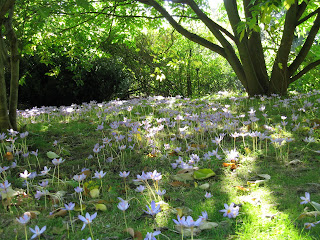 The incongrous Kew Gardens pagoda in the distance. 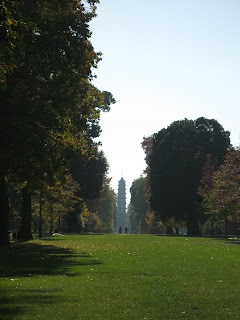 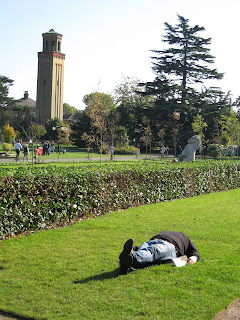 The Boyfriend was very excited about this greenhouse because he thought The Cure made a film clip there. (We think it was actually a different one on the other side of the Gardens, but I didn't take a photo of that one, so...) 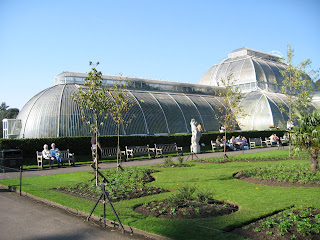 The full set of photos, including close ups of The Boyfriend's "corpse", is on flickr here.
Posted by Lauren in Brisbane at 09:52 2 comments: