A few weeks ago I did a solo trek into north London (well, only King's Cross) to the London Scala to see Australia's Clare Bowditch and Australia's Gotye perform live. Clare was very entertaining to watch - doing almost a stand-up comedy routine in between her breathtaking songs (although she seemed to struggle a bit with her new guitar, and some of the songs are just not quite the same with the full band). When she played an acoustic version of The Moon Looked On, she happened to look right at me (the dork looking on earnestly in the front row) and I was almost overcome with some sort of emotion... a positive one anyway. This is the album version of the song:

It also happened to be Clare's birthday, so the producer/sound girl/whatever she was put a surprise on the stage for Clare before the performance. 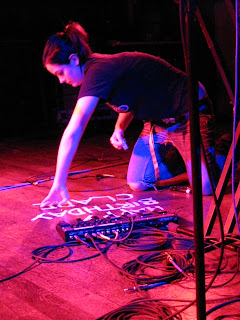 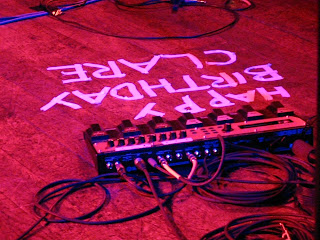 Here are some shots of the lady on stage. She managed to be both beautiful and graceful despite coming out in a crumpled sort of dress thing, a sticker on her arm, and tatty cowboy boots, which she proceeded to take off early on because they were uncomfortable. 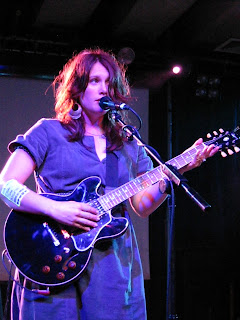 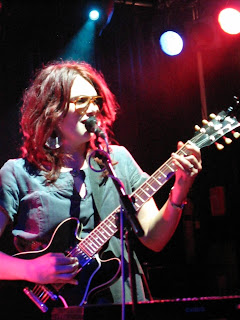 It was interesting to see her in London, because she's basically unknown here, whereas in Australia she's been around the music traps for years and last year won the ARIA (like an Australian Grammy, sort of) for best female artist. Here she was supporting Gotye, who as far as I'm concerned has a lower profile than Clare in Australia. So very few of the audience seemed to know the songs and sometimes it seemed awfully quiet in the room; like we were seeing a classical quartet instead of a pop singer.

This is her finale piece de resistance - playing a teapot. 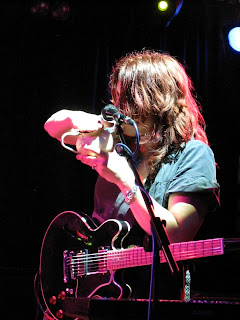 After all that, I didn't have the stamina to stay for Gotye. It was a weeknight!!
Posted by Lauren in Brisbane at 09:55